This past June, José Saramago died.  He was 87.

Awarded the Noble Prize for Literature in 1998, he was the author of such novels as Blindness, The Gospel according to Jesus Christ, and The Year of the Death of Ricardo Reis.

I recently finished the Portuguese novelist’s The Notebook, a year’s worth of literary, political, and personal entries from his blog from September 2008 through August 2009.  He shared collected “commentary, reflections, simple opinions about this and  that, in short whatever happened to occur to me.” [xi]

Therein, he characterized his wife Pilar as: “the most practical and objective of all the individuals I know.” [54]  His favorite writers included Camões, Cervantes, Montaigne, Voltaire, Pessoa, Kafka, Borges, and Gogol.  He was intensely concerned with the struggles of the Palestinian people.  A member of the Portuguese Communist Party for almost forty years, he was often critical of the Left’s fecklessness.  And there are numerous rants in these pages against the horrors done to his beloved Italy by Berlusconi.

Saramago’s blog contains passages that inspire and irritate,  move and inform, provoke and please.  What follows is a small sample…

On George Bush: A liar emeritus, he is the high priest of all the other liars who have surrounded him, applauded him, and served him over the past few years. [7]

The Catholic Church cares little or nothing for the destiny of souls, and has always had the control of bodies as its primary aim, while secularism has always been the first door through which the body seeks its escape along with the soul, given that one of them cannot set out on a path in any direction without the other. [202]

On Palestinian poet Mahmoud Darwish: Rooted in life, in the sufferings and eternal longings of the Palestinian people, Darwish’s poems have a formal beauty that often skirts transcendent moments of the ineffable with a few simple words, like a diary where one can trace step by step, teardrop by teardrop, the catastrophes—but also the profound, if scarce, moments of joy—a people who have undergone a martyrdom for the past sixty years to which there is still no end in sight. [146]

We must not be complicit in the chaos with which the Bush Administration has infected half the world. Neither as governments, nor as citizens. [82]

When the Zapatistas came out of the Lacandon jungle, having crossed half of Mexico to reach Zócalo Square, I was there, one of a million people. I experienced the thrill, the pulse of hope running through my whole body, the desire for change and the desire to make myself something better, less selfish, more capable of giving myself up to it. Marcos spoke, he named each of the ethnic groups of Chiapas, and as each name was spoken it was as though the ashes of millions of indigenous Indians had detached themselves from their tombs and been reincarnated. I’m not writing literature, which comes easily, I’m trying—awkwardly—to put into words something that no words can express: the moment when the human turns superhuman, and then, in one step, reverts to its most extreme humanity. [94]

On Lisbon: We, the inheritors of this city, are the descendants of Christians and Moors, of blacks and Jews, of Indians and Orientals, in short, of all races and creeds considered good, along with those that have been called bad. [5]

In Spain, to act in solidarity (solidarizarse) is a verb daily conjugated in three tenses: present, past, and future. A memory of past solidarity reinforces the solidarity demanded by the present, and both together pave the way for future solidarity to return and show itself in its fullest glory. [135]

But each word [Colombian journalist] Laura [Restropo] writes of them are tears, groans and cries that would keep us all awake at night if our highly flexible consciences had not grown accustomed to the idea that the world is going where those who control it want it to go, and it is enough for us to cultivate our own patches the best we know how, without troubling ourselves about what may be occurring on the other side of our living room wall. [260]

What we call the state of the world is the state of ourselves, wretched humanity, inevitably made up of old people who were once young, young people who will be old, and those who are no longer young but are not yet old. [65]

Personal egotism, indolence, lack of generosity, the petty daily instances of cowardice, all of these contribute to this pernicious form of mental blindness that consists in being of the world and not perceiving the world, or in only seeing what, at any given moment, is capable of serving our own private interests. In such cases, we can hardly wish for some sign that our conscience will awake and shake us urgently by the arm, asking the point-blank question: “Where are you going? What are you doing? What do you think is going one?” What we need is an insurrection of liberated consciences. But is such a thing still possible? [262] 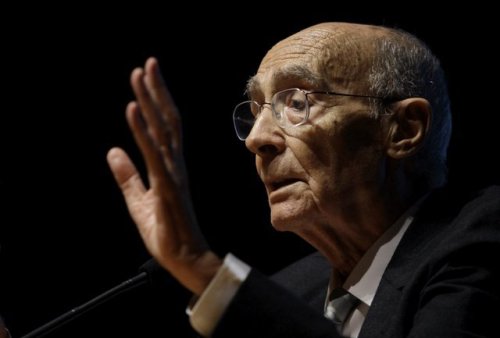