Those photos of Dorothy Day—
Like the one you saw in the office at the Catholic Woker
Where you were first scouted as a model
By Antoinette six years ago now—
Dotties’s scowling, old, weathered, as if she’s saying,
“Don’t have too much fun
Don’t you know people are being crucified even now
“By this filthy rotten system
While you are playing hackey sack?”

When Marvin was a mere youth
He lived a year at the NY Catholic Worker
One day that spring as his year was coming to an end
(He had to move on to become an unapologetic intellectual)
He saw Dorothy coming down the stairs toward him
She greeted him with enthusiasm and planted–
As she stepped off the last step onto the floor–
A big, wet kiss.
He claimed she was one of the most beautiful women he’d ever seen.

Which brings me to Emma.
Ah, Emma.
Emma—firebrand
Emma—threat to the established order
Emma—orator and organizer and anarchist
Emma—still vibrating in those words easily quoted 659 times a day somewhere on planet earth:
“If I can’t dance, I don’t want to be part of your revolution”
Emma—disillusioned and relentlessly critical of the stale Soviet rehash of domination of the workers
Emma—familiar with beatings, intimate with jails
Emma— a woman of marvelous, multitudinous strengths
Right?

She was all for worker autonomy and liberation
She was all for girls and women living as full human beings not re-usable toys
She was walking the talk and getting stoned for it
AND
Along comes Doctor Reitman with his charms, political oddities, and powers of bewitchment
And Emma–
“How I want you! I want to devour you”
“I forget everything for want of you”
“I was ashamed of my craving for you, and yet I couldn’t sto.” 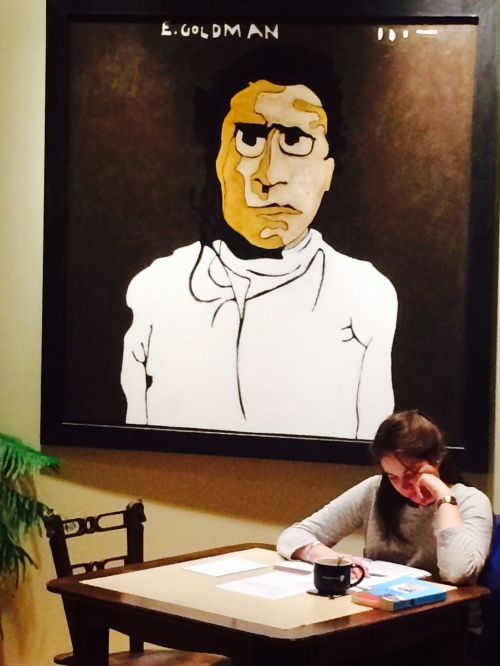