I’m delighted that you inquired about where to start with reading Noam Chomsky. I look forward to discussing Hegemony or Survival with you in a  couple  of weeks.

Back in 1986—those horrid years of the Reagan Administration—I would sometimes take refuge in my rusty, white 1976 BMW 2002 and drive around Old Louisville or out River Road, and listen to audio cassettes of David Barsamian interviewing Noam Chomsky.  Several years later, those interviews were collected in a book entitled, Chronicles of Dissent, with an introduction by muckraker par excellence Alexander Cockburn.  Cockburn  spoke for me and many others when he noted that “people will go to a talk by Chomsky partly just to reassure themselves that they haven’t gone mad; that they are right when they disbelieve what they read in the papers or watch on TV.” Since you’re a history teacher, well-versed in Howard Zinn’s writings, I think you will appreciate Chomsky’s relentlessly critical perspectives.

City Lights recently  published Because We Say So, a third  collection of Chomsky’s articles over the last several years from the New York Times Syndicate. These commentaries on current events and reminders of recent history easily find a home in publications abroad (like Eliot Weinberger’s essays), but not so much in the “United States of Amnesia” (Daniel Berrigan).  These articles are succinct, incisive, and unsettling.

I’ve frequently called people’s attention to Ernesto Cardinal’s poem, Cell Phone; Chomsky, too, notes that, in the  Congo,  “millions have been killed in recent years to ensure an ample supply of minerals for cellphones and other uses, and of course ample profits.” Cardenal begins his poem, “You talk on your cell phone/And talk and talk/And laugh into your cell phone/Never knowing how it was made…”

Chomsky highlights the death by torture of Palestinian Arafat Jaradat, which may remind us of  identical results at the hands of the US military in Iraq, Afghanistan and black sites:   “The need to humiliate those who raise their heads is an ineradicable element of the imperial mentality.”   Is there any dissent among the current presidential candidates to the U.S. imperium?

Consider how U.S. leaders prate on about the necessity of insuring  Israel’s security, all the while sustaining and defending Israel’s shattering of any security for the Palestinians. Chomsky observes, “Contempt for the worthless victims is no small part of the barrier to achieving a settlement with at least a modicum of justice and respect for human dignity and rights.”  In Dear Layla Welcome to Palestine, I offered numerous snapshots of the dignity and resiliency of the Palestinian people.

As the US continues to remember the ongoing 50th  anniversary of the US involvement in Vietnam, Chomsky summarizes what few US citizens seem to know: “we carried out our mission to bring stability, equality and freedom by destroying three countries and leaving millions of corpses.”  At the outer limits of the  liberal mainstream, some commentators will admit the war was a “mistake,” as they also say about Bush’s illegal invasion of and aggression against Iraq. We may make “mistakes,” but committing crimes is not even in the realm of the thinkable.

In the past year, there has been excitement in the U.S. about a new relationship with Cuba, but it is unimaginable that U.S. leaders could admit the following: “The US claims that it is shocked by Cuban human right violations, overlooking the fact that the worst such violations are in Guantanamo; that valid changes against Cuba do not begin to compare with regular practices among Washington’s Latin American clients; and that Cuba has been under severe, unremitting US attack since its independence.”

Yet countless Americans still take seriously the U.S. government’s calls to oppose the minatory terrorists that threaten civilization as we know it; Chomsky, however, points out that  President Obama’s “drone-driven assassination program [is] by far the world’s greatest terrorist campaign, and is also a terror-generating campaign.” As wedding parties have been the recipient of U.S. bombs, it’s highly unlikely that the survivors, and their families and friends, will forgive and forget.

El Salvadoran theologian Jon Sobrino once wrote  that people  “are always seeking excuses to avoid confronting—or even coming into contact with–reality.”  Chomsky’s contribution to his fellow citizens for the last fifty years is to confront the bloody realities of U.S. power and the denial of (or blindness to) such realities by the intellectual class. If one of your students is ready for an unsparing look at politics in and beyond the United States, Because We Say So would be a good place to start. 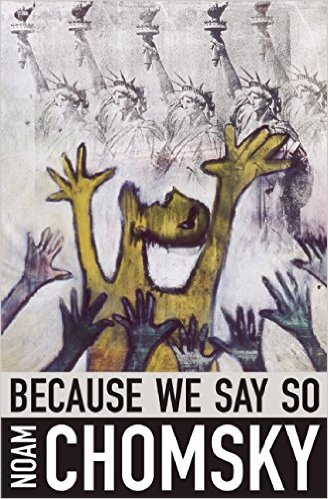