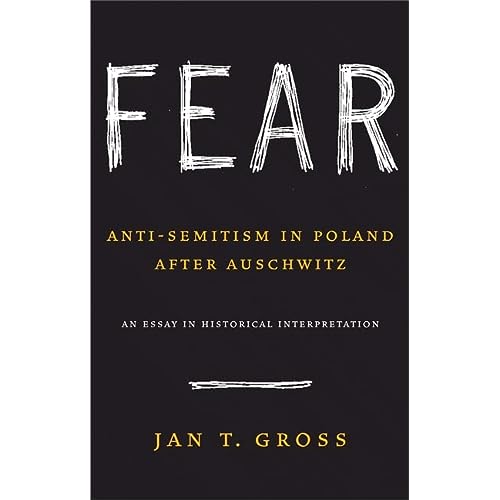 In Fear, historian Jan Gross explores a seemingly baffling phenomenon. How is it that there was aggressive anti-Semitism in Poland, after the Holocaust?

How is that even thinkable? After all, did not ethnic Poles and Polish Jews both suffer horrifically during the Nazi years? Did not Poles see much more intimately than other Europeans what the Nazi system of mass murder was like, since Poland was the site of so many death camps?

In his investigations, Gross was intrigued to discover cases of Righteous Gentiles among the Poles who hid Jews during the Nazi slaughter, yet after World War II, they were reluctant to let their heroism be known to their fellow Polish citizens. Why be silent, when they exhibited an all too rare humanity on behalf of the Jews? They were afraid of the likely hostile reaction by their Polish neighbors.

Here is Gross’s summary view: “I see no other plausible explanation of the virulent postwar anti-Semitism in Poland but that it was embedded in the society’s opportunistic wartime behavior. Jews were perceived as a threat to the material status quo, security, and peaceful conscience of their Christian fellow citizens after the war because they had been plundered and because what remained of Jewish property, as well as Jews’ social roles, had been assumed by Polish neighbors in tacit and often directly opportunistic complicity with Nazi-instigated institutional mass murder” (247).

At the center of Gross’s study is an analysis of the murderous outbreak of anti-Semitism in Kielce in 1946 and the reactions to it. Gross estimates that up to a quarter of the population participated in some degree with the violence against the town’s Jews. Scores of Jews were murdered by both police and townspeople. Authorities themselves took pains to side with the locals involved in the melee, and not be seen as sympathetic to the Jews under attack. With one exception, the Catholic Church hierarchs basically blamed the Jews for what happened. There was no social stigma attached to those involved in the harassment, beatings, and murder. Gross quotes a witness to the stoning of a Jew at that time: “After several hours of these events, people were tired but in spite of everything they were lifting stones and throwing them calmly, as if the death of a human being, killing of a person, were not at stake here” (103).

One rare shining light Gross identifies in Fear is the outraged stands taken by Polish intellectuals vis-à-vis their fellow citizens’ blithely brutal behavior. Gross comments that these interventions “make all the difference for Poles today, and can be cherished as a measure of moral sensitivity which has not been dulled among the country’s spiritual elite. But at the time they went unheeded, and their calls for vigour combating anti-Semitism fell on deaf ears, very much like the warnings Jan Karski delivered to the Polish government-in-exile in 1940, when he reported that anti-Jewish measures of the Nazi occupiers resonated well with large segments of the Polish society” (133). This is a familiar, sad, and predictable story: Those who embrace the prophetic vocation of afflicting the comfortable experience a kind of marginality, or exile.

The “fear” of the title can be interpreted as belonging to various groups: Obviously, the surviving Polish Jews, who were subject to abuse, intimidation, and murder; the Righteous Poles who were afraid of the consequences if their neighbors knew they had hid Jew during the war (the neighbors might have murdered them in hopes of digging up the mythic Jewish wealth their neighbors must have appropriated); and the Poles who had benefited from the dispossession of the Jews and were, at some level, fearful of the survivors who reminded “them of the fragility of their own existence, of the propensity for violence residing in their own communities, and of their own helplessness vis-à-vis the [Communist] agents–who now invoked class criteria for elimination from public life” (emphasis Gross’s, 256).

But the word “hate” could have also joined “fear” in Gross’s title. He retrieves a pungent line from Tacitus: “It is indeed human nature to hate the man whom you have injured.” While some Poles had an acute conscience that led them to act compassionately toward the Jews, many others had a bad conscience that first led them to act complicitously with the Nazis, and then to treat the Jewish survivors with contempt and violence.

Gross’s tale has an eerie pertinence to our present time. His themes –ethnic cleansing, dispossession of a people, material gain following on persecution of the suspect group, the bureaucratic processes by which such theft is legitimated, perpetrators evading justice–are still all too familiar. Gross cites Albert Camus’s candid self-examination from World War II: “During these four dreadful years all Frenchmen were witnesses to a crime not foreseen by any law (and in saying this we are weighing our words carefully): the crime of not doing enough.” Gross’s lacerating study reveals how few Poles did enough. Surveying our own world today in the light of the themes of Gross’s troubling book, can we honestly say that we are doing enough?