She represented the honor and conscience of Russia, and probably nobody will ever know the source of her fanatical courage and love of the work she was doing.

Colleagues helped put together the volume, Is Journalism Worth Dying For? about the intrepid Russian journalist Anna Politkovskaya, assassinated in 2006.  The book contains writings from the last years of her life as well as stirring testimonies by those who knew her and respected her work.

For years she’d written about the horrors in Chechnya, which earned her the denunciation you’d expect from her own government.  From Tolstoy to Solzhenitsyn, such dissidents are ever a thorn in the side of Russian power, which thinks  it is, or should be, worthy only of praise.

Here is a small sample of her voice…

I have never sought my present pariah status and it make me feel like a beached dolphin. I am no political infighter.

I will not go into the other joys of the path I have chosen: the poisoning, the arrest, the embanking by mail and over the Internet, the telephoned death threats. The main thing is to get on with my job, to describe the life I see, to receive visitors every day in our newspaper’s offices who have nowhere else to bring their troubles, because the Kremlin finds they stories off-message. The only place they can be aired is in our newspaper, Novaya gazeta.

What am I guilty of? I have merely reported what I witnessed, nothing but the truth.    [6]

Believe me, there is nothing more hateful than, in your own country, to feel that you are a target for shooting practice for parasites living it up, eating and drinking at your—a taxpayer’s—expense. And then they have the gall to denigrate you. [17]

The war we are waging in the Caucasus dishonors our nation from  top to bottom. Do you wonder how we can ever atone for this? How long will it take? Remember, Germany spent half a century trying to free itself from the tatters of its national disgrace. Throughout those decades, Russian children were playing games of fighting the Germans, and the grown-ups encouraged them. Are not we the Germans now? How long will it be before Chechen children stop playing games in which the most unpopular boy is the one who has to be the Russian?  [35-36]

It is the detail which  gives the measure of our humanity. How we react to the tragedy of one small person accurately reflects our attitude towards a whole nationality; and increasing the numbers doesn’t change much.  [37]

A typical Chechen woman today is really a zombie: she has been turned into one by the grief in which she has been immersed for year after year, by the environment surrounding her family. She has been trained to be a suicide bomber not in foreign training camps but by the brutality shown by the warring sides towards the civilian population in Chechnya.  [44]

We once again have a region in our country where the laws of the Russian Federation do not operate. It is called Chechnya. Where soldiers can do whatever their appetites dictate, and criminal cases against them, even when they have been opened, are subject to “laundering” in Essentuki, with a kindly nod towards the murderers, and quite extraordinary heartlessness towards their victims.  [196]

Europe effectively condones the existence of a territory where atrocities go unpunished, and pretends that the war being waged there does not concern Europeans.  [311]

And consider the words of Yevgeniya Lyozina, a student:  Anna Politkovskaya. I saw her only a few times, and never met her personally.   A young, good-looking woman. Born in 1958, the same year as my mother. Very composed and self-assured.   It is impossible to forget people like her, because your first impression when you meet them is that they are real human beings, and that is how you remember them. Like many others, I can see that this murder was committed because Anna Politkovskaya’s activity gave no peace to those in our country who are violating all the laws of truth.

I am still not very old and, looking at the example of this courageous woman, I want to live my life honorably, as she did.  For that, as I understand it, I must be sure always to stay close to the truth. As regards Anna Politkovskaya, truth was undoubtedly and always on her side.  [401] 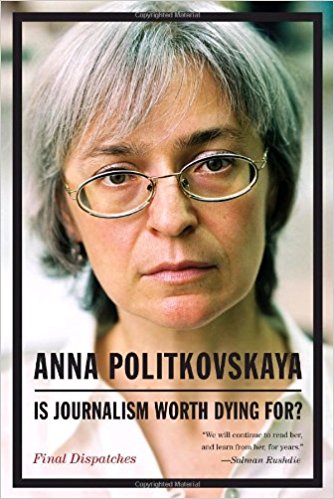