for Oliver, Cami, and Julie

Sebastião Salgado, From my Land to the Planet
Contrasto, 2014

I first heard the name of Sebastião Salgado from Mev in the early 1990s.  She esteemed him more than any other living photographer, as he embodied  a secular “preferential option for the poor.”  Mev wished to  make a similar option, precisely as a photo-journalist and theology student.  The Struggle is One, her book about the liberationist church in Brazil (Salgado’s homeland),  was one expression of her commitment.

Given your interest in and commitment to photography, I wanted to share a bit with you from Salgado’s recent autobiography, From my Land to the Planet.  The book was put together by Isabelle Francq, who interviewed Salgado during a very busy period of his life.  The book necessarily goes into much greater detail than what is suggested in Mev’s interview with him from 1993, which is one of the “Seeing the World” chapters in The Book of Mev. I think you will find a lot in this book that stimulates your imagination and photographic praxis.

Salgado and his girlfriend Lelia became politically involved in the days of the Brazilian military dictatorship (her uncle was a founder of the Brazilian Communist Party).  But as things heated up there,  they choose to leave the country for France. Salgado was trained early on as an economist.  But he grew to love the adventure of taking photographs much more than writing detailed reports on countries  like Rwanda, Kenya and Uganda. The couple, eventually to marry,  used their savings to invest in the best possible photographic equipment.   He began to see this work  less as being journalistically au courant and more as investing time to listen to  people and community’s “long-term stories.”

This is one of the aspects of Salgado’s work that most impressed Mev:  His willingness to be immersed in the communities where he was taking photos.  He reflected on this path:  “Totally integrated with his surroundings, the photographer knows that he is going to witness something unexpected. When he merges into the landscape, into that particular situation, the construction of the image eventually emerges before his eyes. But in order to see it, he has to be part of what is happening. Then, all the elements will start to play in his favor.”   He lived for a year and a half in the Sahel during the famine.  He got to know the people through the organizations working with them.  This reminded me of how Mev would make connections with the local Catholic church (and Maryknoll Missionaries), say, in Brazil, and through them meet people and become familiar with their struggles.

Salgado identified with the tradition of social documentary photography and became committed to long-terms plans to  craft photo essays developed over years.  Like Thich Nhat Hanh’s 4th Tiep Hien precept on not turning away from suffering, Salgado repeatedly looked it in the face and tried to make a contribution: “No photo, on its own, can change poverty in the world. Nevertheless, combined with text, films and all the efforts of humanitarian and environmental organizations, my images are part of a wider movement denouncing violence, exclusion and ecological issues. These means of information contribute to raising awareness in those who see them, of the ability of all of us to change the destiny of humanity.”  This  reminded me of what Che Guevara said to medical students in Havana: One can’t be a revolutionary doctor without being part of a revolutionary movement.

In one song, Bob Dylan sings, “Dignity never been photographed.”  Salgaldo’s entire output as a photographer would dispute this.  When he was a young and developing photographer, he realized, “the world is divided into two, on one side, freedom for those who have everything and, on the other, a lack of everything for those who have nothing.  Though my photos, it was this dignified and exploited world that I wished to show to a European society sophisticated enough to receive this appeal.”  His project, Workers, was a homage to manual laborers: “I loved this period of my life because wherever I found man working, he was proud to be producing, creating. I was impressed  by the ingenuity of the human race, capable of taking a piece of steel, welding it to another, and then another … and, little by little, of making for example a ship out of it.” In Genesis, after he went to those places around the world that had not been touched by modern life, he understood that “the Earth offered us a magnificent lesson in humanity. Discovering my planet, I have discovered myself and I have understood that we are all part of the same whole system-Earth.”

Apart from his photography, the book reveals other interesting aspects of Salgado’s life.  For example, in Brazil he was friends with Augusto Boal, who developed the“Theater of the Oppressed.”  Lelia has been integral to the creative work  for which Salgado is celebrated. They worked through struggles when their second son was born with Down’s Syndrome (“For a long time, we reflected on Rodrigo’s problem, discussed it, until one day we found the solution: there is no solution. He is our son, he is part of us, and that’s the way it is. We have to love our son, and love him as he is”).  After documenting the horrors in Rwanda, he had a breakdown that led to deep pessimism about the world.

One photo can’t change poverty, obviously.  Yet, many people in the U.S. have phones with cameras, which are always with them.  Even without Salgado’s equipment, decades of experience, and giftedness, ordinary people who are immersed in a situation, who are attuned to what is happening, may also be able to capture, however modestly,  images of on-going struggle and always-to-be-recognized dignity. 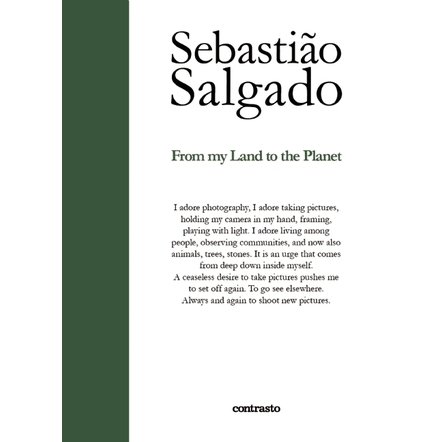