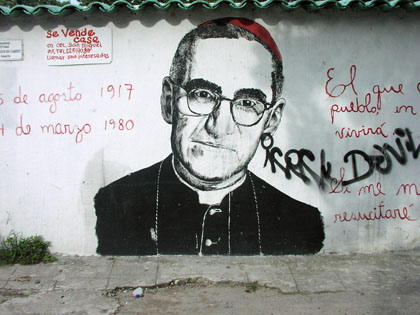 In the mid-1980s while working at St. William Church in Louisville, I was involved with the Sanctuary Movement. The church offered hospitality to a couple from El Salvador, Manuel and Maria Elena. They were the first Salvadorans I’d ever met. Many years later, Steve Kelly, S.J had been working in El Salvador, but he was booted out of the country by the military. Mev Puleo traveled to El Salvador in 1993, working with Crispaz, and interviewing her friend Ann Manganaro.

Beginning in the early 2000s while teaching theology at Saint Louis University, I had students who took a semester abroad in the Casa de la Solidaridad in San Salvador, El Salvador. Years after I left SLU, I’d hear from former students about someone coming back after the semester in Central America. I was happy to visit with these people who often had their worlds turned upside down.

In 1948
When talking with members of the Dominican order

Decades later
There was a bishop who was considered prudent

But through his direct contact with the suffering
Of the farmers, unionists, pastoral agents, and priests—

He found his tongue
He spoke with parrhesia

Which could be translated
By the insult once leveled

At Egyptian feminist Nawal El Saadawi
Who was imprisoned by Sadat:

“Uncalled for boldness”
The oppression of the poor summoned his boldness

He wouldn’t shut up
He protected the victims

He got specific
Since the Idol is in the details

Yes he was murdered
Yet he lives on

Thinking of You and Anna Politkovskaya

You know there’s no safe, neutral, objective standpoint
To do your journalism
You have to be ready for incomprehension

In academia, the church, the USA
But not of any of them
You have to be ready for a rough ride

Walking with the Salvadorans
by Annie Boyd-Ramirez

In Social Justice class at SLU we were reading Like Grains of Wheat: A Spirituality of Solidarity by Marie Dennis and Margaret Swedish. The authors interview scores of North Americans who had their eyes opened by their relationships with Central Americans since the early 1980s. Here’s a passage from early in the book: “The stories of solidarity that impacted the lives of thousands of North American people of faith are profound and complex, yet with something quite simply in common. They began often with a small gesture of accompaniment, a decision to walk, for however a short time, with a people, a community, whether in a war zone, a refugee camp, a town under siege, or a village of displaced persons or refugees seeking safety in the United States.” What these stories initiated, however, was a journey far different from anything that had been anticipated, a journey into the real world and its painful reality, a journey into themselves within that world, a journey into a faith that for many had become cut off and isolated, detached from the conditions of real human beings. They discovered this faith vividly alive in the hopes and aspirations of the poor. They found themselves on a journey that stretched them, pulled them, stripped them, and liberated them.

I just wished my students could have met Annie Boyd, who recently sent me the following letter.

I hope this finds you well in the midst of a new semester. Thank you so much for finding me on Facebook and for your message. I really appreciate it! I’m so glad to hear that you and Laura connected once she returned to SLU. She was definitely a fantastic student this past summer.

I must be honest, I’ve been meaning to write you for months now…even before meeting Laura. I first heard about The Book of Mev here in El Salvador, four years ago when I was a student at the Casa program. Some of my fellow students were from SLU and were awaiting its release. Luckily, someone sent it down. While I was in the States for the holidays, I finally bought it. Reading The Book of Mev was an experience of healing and empowerment for me. I felt so connected to you and Mev while reading it here in El Salvador, which is such a meaningful place for the both of you. I was comforted and felt more hope in life by the love you and Mev invested in one another. Mev’s poetry and photography inspired me to not be so shy, and to do ‘dare [myself to] invade their lives, steal this moment…’

In February, your book accompanied me while I accompanied a group of Salvadoran families on a journey through parts of Guatemala and southern Mexico. The families are a part of an organization called COFAMIDE, their loved ones have disappeared or have died while migrating North. We visited with migrant shelters, NGOs, church groups and other people who are advocating on behalf of Central American migrants and against the human rights violations occurring in the areas. The family members looked for those who are missing while participating in marches, press conferences, meetings, and demonstrations. I was invited to be the group’s photographer…and I faced many moments of challenge… to be present in such a way- that with hope, captures the essence of a moment, the experience. I definitely felt Mev’s presence with me… in Chiapas …(where I learned she spent time) and other places where people’s stories of injustice and resilience need to be told and seen. At times during the journey, I felt in the middle of nowhere but on the edge of cliff. It was a very liminal state- very much in present reality- but at the same time- completely present in a terrible nightmare of crime, distrust, violence, and darkness. And this finite reality grows day after day just as 500-700 Salvadorans alone leave their country every day. What do we do about this….? How do you stop or at least, lessen such abuse and violence?

During the trip, we spent much of our time driving…I would look out the window and ponder my almost unanswerable questions, and read, read, read The Book of Mev, I found encouragement in your writings, in your stories..in the life you and Mev lived. Despite feeling emotionally overwhelmed from the heaviness of the complexity of the issues at hand and in my daily work as a social worker; I felt a push to be resilient, to endure the reality, to not become hardened from it, to hold myself accountable- to hold others to the same accord, to do my best…to hope the best I can, to be as present as I can, to take care of myself so I may be available to care for others, to celebrate life, to live from a source of gratitude, to love the best I can…these insights of consolation and energy came from reading of the dedicated, creative, hopeful, faithful, love-fill life you and Mev lived.

Through and through, your book and stories continue to make an impact on me and are a source of meaning.

Thank you Mark. Truly, thank you.

I will be sure to make it to St. Louis sometime when I’m back in the States. I’d love to meet up!

Much joy and gratitude to you,

That Day at Café Ventana

What I really want to say is
Lindsey, thank you
For sitting here
Sunshining at Café Ventana

All those wrist bracelets that have 33 stories behind them
All those memories of El Salvador
Paralleling my memories of Palestine
All those friends who love you truly, madly, deeply

Thank you for coming on Thursday nights
And getting to know
By little and little (D. Day’s mantra)
Fifteen new human being creators

Getting to know you makes me ask this question:
“What am I doing with my life?”
And this one:
“Who am I being in this one life?”

Thank you, Lindsey,
For telling the sharp truths
Of your life
I look forward to so many moments

An Evening with Danielle Mackey

We invite you to join us in welcoming Danielle Mackey back to St. Louis!

An alum of the Casa de la Solidaridad program and Saint Louis University (2008), Danielle has worked in El Salvador with the Share Foundation, the Colegio Maya, and, currently as a freelance journalist. She is beginning a major project, “Narratives and the Power of the Organized Transnational Majority.”

Our friends at Sophia House–Maria, Katie, and Annie– are happy to host a potluck dinner and discussion with Danielle on Tuesday 3 July 2012, beginning at 7 p.m. Katie will make delicious vegan lasagna; the rest of us can contribute what we are able. Sophia House is located at 4547 Gibson Avenue in Forest Park Southeast (63110).
Danielle will begin sharing about her living and working in El Salvador at 7:45. She would love to hear people’s own joys and struggles from our experiences, too.

If you have questions, write me back!

This page is part of my book, Dear Love of Comrades, which you can read here.