Chelsea is in my Humanities in Western Culture course and wrote the following reflection.

Last week in class we were talking about the cost of clothing/ items that we have here in America compared to with what they are made for in other countries. Someone brought up the movie The True Cost and you said that if we watched the documentary and wrote a little bit about it we could get some extra credit points.

I watched the movie and it was really eye opening. The movie begins with talking about how fast fashion is such a big trend right now. Fast fashion is the idea that style changes so frequently, usually every season and sometimes a lot during the season. This means that the people who are producing the clothing are constantly work long hours and always having to change the way in which they make the clothing. I found the documentary very interesting because it really does go to show that people will go to all cost in order to get affordable items for consumers.

The part that I really enjoyed learning about even though it is very sad is the about the sweat shops in Bangladesh. Bangladesh is the second highest fashion maker in the world behind China. The documentary talked about several accidents that happened in factory buildings. Particularly four different events. Three of the events were fires that took place in the work place and the fourth was a six story building collapsing. With all of these accidents happening in factories it claimed the lives of 1, 538 people. Even though those accidents claimed that many lives nothing has changed. People still work in inhuman factory buildings and people still know that those buildings are unsafe and not fit for people to be working in. The thing is they don’t care because they are making a huge profit for the limited amount of money they are playing the people that are working for them.

I really hope that maybe some change will take place in our world. Yes, it is great getting products for a cheaper price but we also need to realize that people are in danger when we do this. The people we are having make our clothes are making around or less than $2 a day. People rationalize these terrible working conditions with saying, “At least we are giving them a job and money to work for us.” It is terrible to think that people are okay with rationalizing that way but in reality we all do it. We all wear clothes that have probably been made in sweat shops. In my high school we did a day that we didn’t wear Nike clothing because we had heard about all of the terrible sweat shops that they have around the world. I think overall the documentary was really eye opening and interesting to see exactly how the things we wear on a regular basis are made. I highly suggest that everyone watch the documentary. 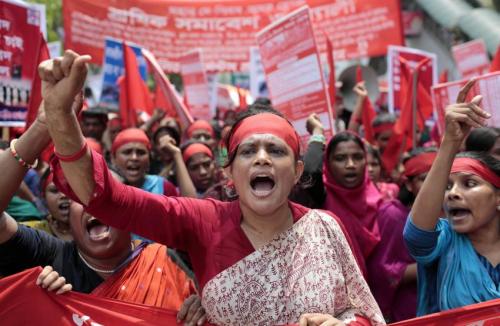