On the dedication page of her 2007 updated collection of Revolutionary Letters, Diane di Prima states: The REVOLUTIONARY LETTERS are dedicated to Bob Dylan; and to my grandfather, Domenico Mallozzi, friend of the great anarchist dreamers of his time, who read me Dante at the age of four & named my mother after Emma Goldman.” The next 160 pages introduce the reader to this lover of freedom and gadfly of power. Revolutionary Letters began in the late Sixties and circulated through various underground newspapers. Subsequent editions added new poems so that the book represents a decades-long portrait of an engaged poet and critical citizen.

In Letter #32, di Prima critiques not just western civilization, but civilization in toto and affirms that we have to kill
“the white man in each of us, killing the desire
for brocade, for gold, for champagne brandy, which sends
people out of the sun and out of their lives to create
COMMODITY for our pleasure…”

She met Suzuki Roshi in the early Sixties and went on to have teachers in Tibetan Buddhist lineages. #43 reminds me of the Fifth Mindfulness Training:
“the map: first goal is health
strong bodies make strong spirit, Venceremos Brigade
coming back from Cuba discover they know how to breathe
They can get up with the sun…”

In #78, a “Bulletin,” she disturbs our reading peace:
“As you read this line one thousand have died of AIDS.
They die alone in furnished rooms. They die on
the earth all over Africa.
halfway around the world the bombs are falling”

In #80, GOOD CLEAN FUN, she reframes the mainstream assumptions on terrorism (violence which only others do):
“and what else than terrorism cd you call those smallpox blankets we gave the Indians
the trail of tears, the raids on Ghost Dancing tribes
It’s terrorism when you’re forbidden to speak yr language
paddled for it, made to run a hundred laps in the snow
in your thin and holey sneakers…
What happened to the Hampton family in Chicago—Fred Hampton blown away in his bed—
would you call that terrorism? Or the MOVE kids in Philadelphia bombed in their home.”

In October 2001, di Prima composed three short poems on the U.S. war in Afghanistan (#86); here’s one of them:
We Air-Drop Transistor Radios
can you eat them?
will they
keep you warm?

In one of the last poems in the book, “TO THE UNNAMED BUDDHIST NUN, WHO BURNED HERSELF TO DEATH ON THE NIGHT OF JUNE 3, 1966,” she writes:
“you with your shaved head and can
of kerosene. Under what driving form
of ecstasy? I pray to taste it once”

Try carrying around a copy of Revolutionary Letters; instead of texting when you have a minute, read one of di Prima’s poems and risk being jolted, unnerved, inspired, exhilarated, reminded, even moved to pick up a pen and write what you yourself see, treasure, dream of, hope for. Then share that scribble with somebody else; solicit and take in her visions and dreams. Start generating and giving away your own letters, revolutionary, incendiary, metta-saturated, you decide. 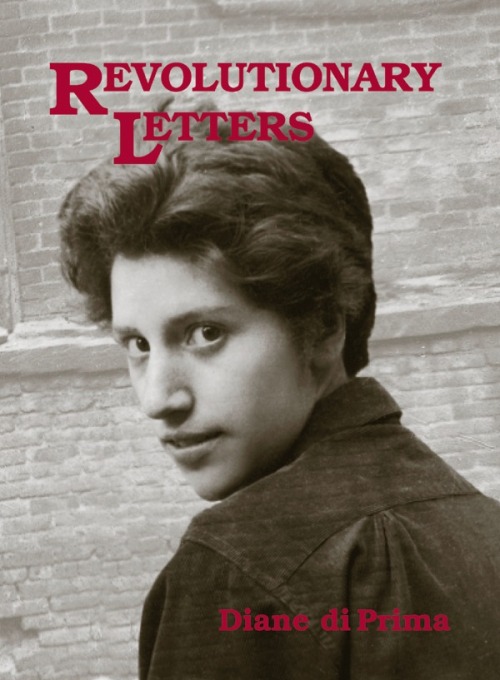