O my Lord, Thou knowest that the desire of my heart is to obey Thee, and that the light
of my eye is in the service of Thy court. If the matter rested with me, I should not
cease for one hour from Thy service, but Thou hast made me subject to a creature.[1]

One of Rabi’a’s early biographers, Farid Al-Din A’ttár, said of her,
That one set apart in the seclusion of holiness, that woman veiled with the veil of
religious sincerity, that one on fire with love and longing, that one enamoured of the
desire to approach her Lord and be consumed in his glory, that woman who lost herself
in union with the divine, that one accepted by men as a second spotless Mary — Rabi’a
al-‘Adawiyya, may God have mercy upon her.[2]

Serving-girl:
“It’s Spring, Rabi’a —
Why not come outside,
And look at all the beauty God has made!”

Rabi’a:
“Why not come inside, instead, serving girl
And see the One who made it all —
Naked, without veil.[3]

2 of Rabi’a’s responses when men asked her to marry them. The first time, she says, “The marriage knot can only tie one who exists. Where is existence here? I am not my own — I am his and under the shadow of his command. You must ask permission from him.” The other time, she says she has three concerns — whether her faith will be sound at the moment of her death, whether the book of her deeds will be put in her right hand (meaning that she would have earned paradise), and which group she will be in when people are led to either paradise or hell. “With such anguish before me, how can I worry about taking a husband?”[4]

“A party of men once visited her to put her to the test., desiring to catch her out in an unguarded utterance.
“All the virtues have been scattered on the heads of men,” they said. “The crown of prophethood has been placed on men’s heads. The belt of nobility has been fastened around men’s waists. No woman has ever been a prophet.”
“All that is true,” Rabe’a replied. “But egoism and self-worship and ‘I am your Lord, the Most High’ have never sprung from a woman’s breast… All these things have been the specialty of men.”[5]

I don’t want the House,
I want the Lord of the House.
What could I do with the Kaaba if I had it?
It’s the most famous idol in the world.
God isn’t inside it, He isn’t outside it —
The truth is, He doesn’t need it.[6]

I carry a torch in one had [sic]
And a bucket of water in the other:
With these things I am going to set fire to Heaven
And put out the flames of Hell
So that voyagers to God can rip the veils
And see the real goal.”[7]

The hadith scholar Saleh-e Morri said, “If you knock on a door, it will open in the end.” Rabi’a objected to this, saying, “When did He close it that he will open it again?”[8] Upton’s version:
How long will you keep pounding an open door
Begging for someone to open it?[9]

Truth can’t come in through your eyes,
Nor can speech go out through the mouth to find Him;
Hearing leads the speaker down the road to anxiety,
And if you follow your hands and feet you will arrive
at confusion —
The real work is in the Heart:
Wake up your Heart! Because when the Heart is
completely awake,
Then it needs no Friend.[10]
I spun some yarn to sell for food
And sold it for two silver coins.
I put a coin in each hand
Because I was afraid
That if I put both together in one hand
This great pile of wealth might hold me back.[11]

“I am the murderer of joy,” said the Angel of Death,
“The widower of wives, the orphaner of children.”

“Why always run yourself down?” said Rabi’a —
“Why not say instead: ‘I am he who brings friend
and Friend together’?”[12]

My peace, brothers, is in my aloneness
Because my beloved is alone with me there — always.
I’ve found nothing to equal His love,
That love which harrows the sands of my desert.
If I die of desire, and He is still unsatisfied —
That sorrow has no end.

To abandon all He has made
To hold in my hand
Proof that He loves me —
This is the name of my quest.[13] 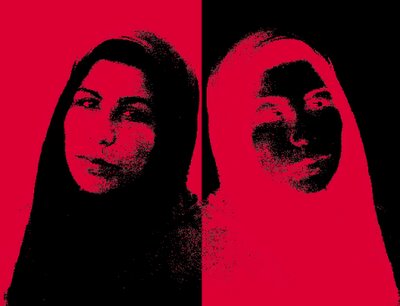