I read Beats at Naropa exactly nine years ago, 2009. In my notes on the dialogues, essays, and interviews are the seeds of what became projects like Arab Writers in Translation Reading Group, People’s History of the United States Monthly Discussion, St. Louis Mindfulness Sangha, Share the Wealth, Dear Layla Welcome to Palestine, Writing to Wake Up courses on Demun Avenue and Spring Avenue, Brothers Karamazov Sessions at Sasha’s, Monthly Via Creativa Colloquium with Cami Kasmerchak for a Year, Chinese Poets in Translation Reading Group, approximately 700 cafe rendezvous, and 450-page draft of Our Heroic and Ceaseless 24/7 Struggle against Tsuris, to name several.

It pleases me to recognize my deep indebtedness to the writers, poets, and artists in this volume who nurtured my vision. Accordingly, I savor provocations like the following—

Diane di Prima: There’s also: once you finish writing something it doesn’t belong to you. It has its own life and needs to go where it wants to go.

Anne Waldman: The scope and influence of the New American Poetry and its attendant offshoots and cross-fertilizations with other writers of the expansive poetry world is an Indra’s Net of inter-relatedness and is thus difficult to codify. Suffice it to say, however, that some of the writers most associated with the Beat movement were already very cognizant of and extremely well-read in Buddhist philosophy and psychology.

Diane di Prima: A lot of this is hit-and-run. It doesn’t have to be a life work.

Ed Sanders: I purchased Howl at the University of Missouri bookstore….basically I memorized Howl; I had it all in my mind. I used to, on the weekends, drive around the town square with my drinking buddies. We’d be drinking Griesedieck Brothers Beer or Falstaff. I’d be howling away reciting Howl. After a while, my friends would start regular conversation while this crazy guy was reciting this strange poem in the back seat. That sort of made me realize I could possibly have a life as a poet…. A year or so after coming to New York I saw Allen [Ginsberg] at poetry readings and Kerouac at poetry readings and Corso at poetry readings and Frank O’Hara and all these people, and slowly I decided to become a full-time poet.

Philip Whalen: But the business of creating a character by jimmying what you know, taking pieces of experiences and gluing them together to make a character, is very exciting and very interesting. You figure that by the time you get through doing this nobody’s going to recognize all the pieces. They’ll just see the single image or person in the book. And it’s a lot of fun.

David Arram on Jack Kerouac: He would go to the most insecure person in the room and consciously go to hang out with them. 79

Amiri Baraka: But as the intellectual reserve of the greatest superpower in existence today, we have an obligation. That obligation is to pull this motherfucker down. Now how do you do that? You are a poet, well why don’t you write some poetry, why don’t you publish some books? I wish everybody here, whatever city they’re in, would give a reading once a month. I wish you would get all the poets you know who are anti-imperialists or socialists or they just don’t dig ugliness, to meet once a month and give a reading…. What I’m saying is that you have to launch a movement again.

Ed Sanders: I learned… from thirty years of observing Allen [Ginsberg] to try to bring that spontaneity and creativity and pizzazz and élan into your activism, into the social concerns you have, to give them a patina of joy and happiness. Because we cannot be dour, stodgy, robotic clawmouths out there chewing away on issues. We have to bring our vision of a new world, a better world, and our dancing shoes, into our social concerns.

Janine Pommy Vega: The thing that Allen is talking about, the changing of consciousness, in Howl, all those episodes he mentions are actually real episodes. That’s Tuli Kupferberg jumping from the Brooklyn Bridge.

Gary Snyder: So notability, the matter of an utterance that gets saved, that is remembered, that is passed on, is a very rare occasion. It is most remarkable, very special, that somebody’s use of language, some particular thing said, should be kept in memory and then passed along.

Kenneth Rexroth: One advantage of knowing the classics is that no matter the what situation you might find yourself in, you’ll remember that someone else was there before you.

Allen Ginsberg: You have to write your own history, nobody’s going to do it for you. 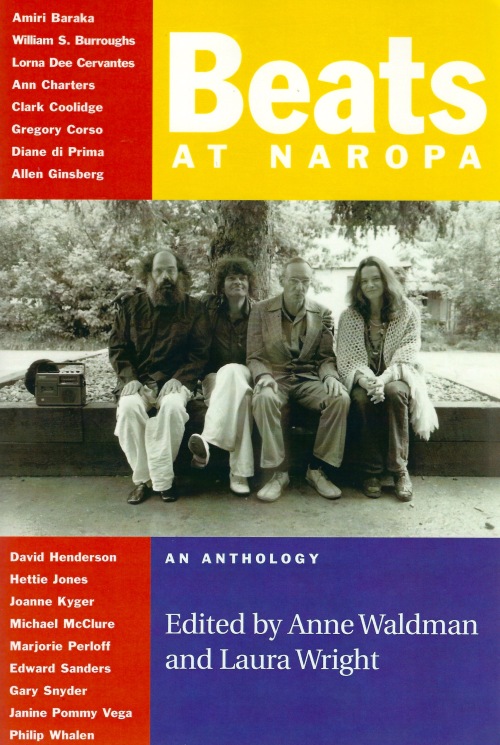