It is not easy for the rich to allow themselves to be touched by the poor, to enter into communion with them, to let themselves be stripped of luxury and comfort. … To love is to reveal the hidden beauty in the hearts of all people, to trust them and to call them forth to greater trust. To love is a way of looking, of touching, of listening to all: taking time with them, especially with those who are broken, depressed, and insecure, revealing to them their importance.—Jean Vanier

And after each interview, the mother would invariably walk to the far end of the table, to a heap of photo albums laid there. Would take one of them in hand, gravely turn page after page, these images out of the national abattoir, the tortured, raped, amputated. The photos that stood horrid surrogate for the young men, absent from streets and homes and churches and factories. The disappeared generation. I could scarcely bear to look at the faces that dared look at such images, and not be turned to stone. How much can one bear?  I did not know. But I sensed that the measure of what could be borne would be revealed neither by psychiatrist nor politician nor bishop. I must go in humility to these unknown, despised lives, upon whom there rested the preferential option of God.  —Daniel Berrigan, on being in El Salvador

Don’t die, [Berrigan] would say. Come along, we need you. Don’t be a conscious integer in the empire’s spiritual body count. He made it seem as if resurrection and discipleship were synonyms.  —Bill Wylie-Kellerman

No sophistic philosophying. No theological profundities. Rather, a direct and categorical imperative: we are not allowed to do harm to others. We are, as Tolstoy wrote, confronted with alternative ways of living: the Law of Love or the Law of Violence. Christians are  to live by the Law of Love. — Earl Crow

No rhetoric. Simple talk, Gospel rooted talk. No notes. Compelling in honesty. He did  not tell others what to do, only how and why he lived as he did. —Thomas Fox

No tweed jacket, no tie. Usually blue jeans and collarless shirts picked up at second-hand shops. No briefcase brimming with bibliography, no ponderous lecture, no sharp-edged questions, no ready critique snapping from his academic ego. No willingness to pay homage to academic convention. Just a profound respect for truth—and a passion to live it. With  courage and humor, with humility and presence, with respect and love. —Robert Ludwig

His encouragement to retreatants is not to espouse his vocation, but to discover and live one’s own. His teaching and presence are not combative or preachy, but suggestive, invitational, evocative. He is a hearer and doer of the word in our midst, a powerful impetus to go and do likewise.  — Robert Raines

Judge:  Father Berrigan, regardless of the outcome of these hearings, will you promise the court that you will refrain from such acts in the future?”

Berrigan:  ”Your honor, it seems to me that you are asking the wrong question.”

Judge: ”Okay, Father Berrigan, what do you think is the proper question?” 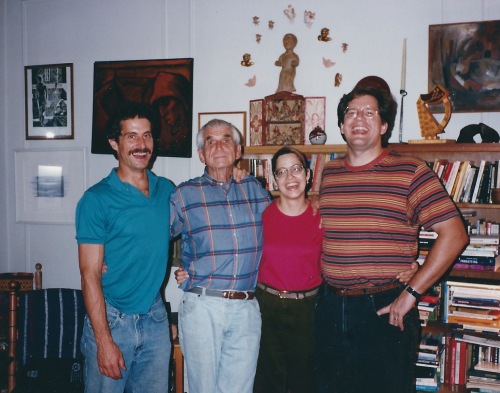