Love everyone, feed everyone, and remember God.
Neem Karoli Baba

I recently gave Ram Dass’s Be Here Now to Laura,  an exceptional Maryville University  graduate  and psychology major. Previously,  I had mentioned to her that part early in the book about Richard Alpert’s growing disenchantment as an upwardly mobile psychology prof and his eventual breakdown/breakthrough with Neem Karoli Baba (“Maharajji”), who became his guru. I thought she might appreciate both the design of the book and some of the teachings, which she’d probably not come across in upper-level psych courses.

Like Ram Dass a devotee of Maharajji, Parvati Markus has recently compiled ardent testimonies  in Love Everyone: The Transcendent Wisdom of Neem Karoli Baba Told through the Stories of the Westerners Whose Lives He Transformed.  The influential psychologist Daniel Goleman was one of those Westerners, and his experience in India was crucial to developing a more holistic and powerful psychology:  “In the West I had been in the heart of American psychology, and here was a sea of love, totally off the map of Western psychology. It was so clear that we had missed something really important about human abilities, human potential, about the heart. Here was a being who was endless love and presence. It wasn’t some temporary state; it was who he was. That’s what really got me.”

Markus’s book covers the years 1968 to 1973. Many people went  to India at a young age (late teens, early twenties), and eventually returned to the U.S. to integrate what they had experienced in ashrams and following the guru around India. People went into the professions, raised families, got stuck,  got unstuck, achieved fame (e.g., Krishna Das).  All of them had been marked for life by  Maharajji, as the following remarks indicate…

“He never asked for anything. Not a dime, not a commitment, not anything.”

“The true miracle was his state of consciousness, his being, that infinite love, that oneness with God, that beyond the beyond. That is so priceless. His presence—that’s the whole thing.”

“I began to get this extraordinary feeling of coming home.”

“I felt that for the first time in my life I was home, that my life was not a mistake.”

“…After a while, we understood and even expected, in the very core of our being, that Maharajji did indeed know everything. Our past, present and future were all available to him like an open book…. You’d see your desire for attention, your reactivity, your anger, your greed, your sexual secrets… and you knew he saw it all. Nowhere to run, nowhere to hide. Many tears were shed while facing your inner darkness.”

“These were tears of homecoming—the feeling of finally, finally having come back.”

“We all had our moments of feeling unworthy of the extraordinary love that Maharajji showered upon us. Our desires, our moral defects, our personal issues would come up and block the light that was always shining on us from Baba.”

“Simultaneously I felt this upwelling rush of compassion that rose to my heart, and I felt such love for these people whom I didn’t even know.”

“That’s the moment that most of us had, where all the pretense of your life, who you think you are, crumbles and you feel that love in your heart for the first time.”

“From the first time with Maharajji, he was lover, father, best friend, child, and so much more to me, all in one.”

“He was showing me that he had visited me in my dream state and told me to come meet him.”

“I knew I was with someone who knew God personally.”

“I felt so grateful that he called me to give me the teaching about death, because clearly that wasn’t Maharajji. I could feel it.”

“Maharajji said to love everyone. Even Monsanto. Even the army. It turns out to be the best teaching. Finding out how to do that, that’s what it’s about.”

Ram Dass observed that the Westerners learned from Maharajji and other Indian devotees that they could identify more with their souls than with their roles. And Jai Uttal came to  realize that there is a much bigger context for the devotion that Maharajji attracted:  “the path of bhakti wasn’t for ourselves, our own experience, our own bliss. Rather, it’s for service, it’s for guru, God, the devotees, the visitors, the universe  of suffering people.” 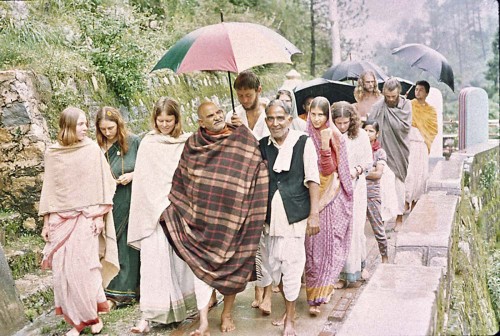 The Guru and His Devotees